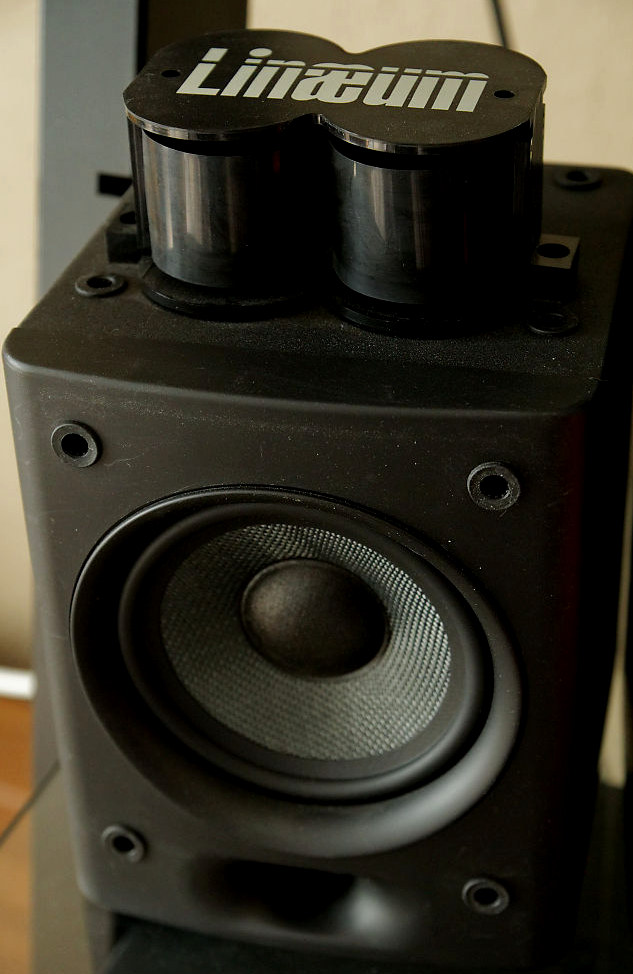 I have owned Radio Shack LX-5 bookshelf speakers for many years. At the time of purchase, they were unique for the cool-looking Linaeum tweeters that sat on top. Other than that, they were not exceptional, with a 5” woofer in an undersized, aluminum box. The stock crossover is a simple first-order. The port is probably too small. Basically, the speakers have always seemed less-than-ideal. Can they be improved?

Years ago, I found various suggestions on how to tweak the speakers and made changes which I documented here (link).

Any time you change something from the factory specs, you’re going to potentially throw off other aspects of a system. A speaker is a system of parts – woofer, tweeter, crossover, cabinet – all designed to work together to produce accurate sound. When I changed the woofer, no doubt other changes occurred. Subjectively, it seemed to me that the woofer was more efficient and tended to overpower the tweeter. Even with the stock woofers, the treble seemed a bit recessed. Looking up the specs on the stock LX-5, Stereophile measured a sensitivity of 81.5. Meanwhile, my replacement HiVi woofer is rated at 85db. While the new woofers sound really great, I wanted to hear the tweeters too.

I liked the crossover mod that I made to the stock woofers, but with the new woofers, this seemed to make the midrange louder, as it gave the crossover a steeper cut-off. I realized that this modification no longer applied, now that I’ve changed the woofers – I’d need to come up with something different, and decided to simply remove this modification.

Even after removing the modification and returning to the stock crossover, the midrange still seemed to overpower the higher frequencies, but it did sound better. Is there a way to dampen the woofer, thus making the tweeter more audible? Searching for solutions, it looks like people try to design speakers such that if anything needs damping, it’s the tweeter, not the woofer. And simply padding with a resistor is generally frowned upon for a number of reasons. Using a DSP, perhaps along with bi-amping, would allow for a much better tuning of the sound, but that introduces a lot of extra equipment – I just want to use my old amp. I also tried a simple treble control, but that doesn’t really fix it. I looked into building a line-level shelf filter, but I don’t think that will work right. There’s always the option of an old-school EQ. So, there are options, but I really wanted to see if I could better tune the speakers themselves with crossover components.

One of the first things I decided to try was to add a resistor and see what happens. That padded-down the woofer, but sounded awful! What is going on? OK, they were right, it’s bad, but why? While it sounded like the midrange was depressed overall, it sounded a bit “honking”. I ran some measurements, and the 1K range had a peak in volume. Lower midrange was damped, but 1kHz left to peak. This is fixed by instead building a proper L-pad (which I’ve done before on another project). I tried that, but with the resistor values I used, it lowered things too much, but at least that 1kHz bump was gone. Perhaps lowering the volume entire woofer is not what I really need anyway. For one thing, it removes the bass as well, plus makes the speaker more inefficient, turning energy into heat in the resistor(s). (This is left better for damping tweeters that are too loud, as many have stated on the Web.) Is there yet another alternative?

Meanwhile, I have been reading about Baffle Step Compensation filters. These are used in a couple of different applications: 1) open baffle speakers, which need severe bass reinforcement, and 2) conventional smaller speakers which may need a bit of bass reinforcement. The problem being solved here is that some speaker designs can have the bass cancel out from having too narrow of a front baffle, with open baffle speakers being much worse, due to the open-back allowing full-strength back waves to cancel out the front waves. Instead of an L-pad, could something like a BSC help me to lower the midrange, and perhaps leave the bass largely intact?

I decided to not make a full BSC based on the various online calculators, partially because I didn’t want as severe an effect (only wanted to dampen about 2 db, not the 6 often recommended for a BSC), and because I had some parts already that I wanted to make use of. Before making it too much of a random experiment, I modeled the changes in a circuit simulator, and I liked the looks of the results. At 1kHz, it’s damped about 2db, without too much effect on lower bass. Note that it’s interacting with the existing inductor, so the whole circuit needs to be modeled.

I used a .33mH inductor and 4ohm resistor in a BSC configuration. (Please refer to other online sources on how to wire a BSC into a crossover and for circuit diagrams. This is not a how-to guide.) Without the resistor, the two inductors (the new one in series with the existing one) would simply lower the crossover point. The addition of the resistor, making kind of a BSC, just makes the slope a bit more gentle – actually slightly raising the volume slightly at 1kHz, while slightly lowering the bass. The difference seems pretty subtle; is the resistor even needed? Time to measure.

This is an overlay of two measurements made with REW (with smoothing) and a Radio Shack SPL meter as the microphone. Due to the inaccuracies of the mic, ignore the higher frequencies (much above 10kHz). Also, ignore the very low frequencies – I was picking up a lot of ambient noise (perhaps combined with more mic limitations). This was also taken on-axis, where the treble is supposedly stronger off-axis, due to the structure of these tweeters.

I made a few measurements of different configurations, and the 5kHz peak seems to be constant. By lowering the midrange, this becomes even more prominant. This seems to be my largest remaining problem.

Looking at the graph, it appears to me that frequences from around 500Hz to around 2500Hz have been lowered slightly, which was my goal – success! Notice that frequencies from about 1.5kHz to 4kHz are a bit depressed – this would be worse if it weren’t for the addition of the resistor. This looks to me like a bit of a balancing act between a couple of extremes, and I don’t quite have it dialed in.

That graph still looks rough, with about a 15db swing in the upper mid/lower treble range! That seems like too much. Is it just the tweeter, or is there still something more going on with the woofer? Coincidentally, the woofer has an impedence peak at that frequency. This page has info on designing crossovers and describes how flattening the impedence can aid in taming those sorts of peaks and getting crossovers to work as expected. This sounded like just what I needed, so I added a Zobel network to the design. The main problem I had was in calculating the values of the components; the Le (inductance) value is not given for the woofer (see above Madisound link), so I guestimated based upon a similar but different HiVi woofer and went with those calculations.

After adding the new components to the crossover circuits, I measured two speakers with the Zobel mod – one with the modified-BSC, and the other with the original factory LX-5 crossover.

Now the range is more like 7db. Much better! Now it’s +/- less than 4db throughout the midrange and well into the treble.

Subjectively, I’m enjoying this modification, although the 5kHz peak probably is making it a bit bright. However, I don’t feel like the woofer is overpowering the tweeter any more, so it’s a big improvement over where I started. I can finally hear my tweeters! It appears as if the difference is subtle in these graphs and that the stock crossover might be the better choice, but subjectively, I enjoy hearing more treble out of the modification and the overall flattening of the lower midrange, so I’m sticking with the BSC modification. Others may want to stick to the stock design, perhaps adding a Zobel.